Since we’ve been back in Bhutan I’ve been working with my Class VII students on a unit of work which could probably be best summarised as a very simple junior guiding program. It arose out of the many excellent experiences we’ve had when visiting our students’ houses or being guided by them through the local forests where their passion for their local culture and environment really helps them overcome any misgivings they might have about not being able to adequately communicate in English. 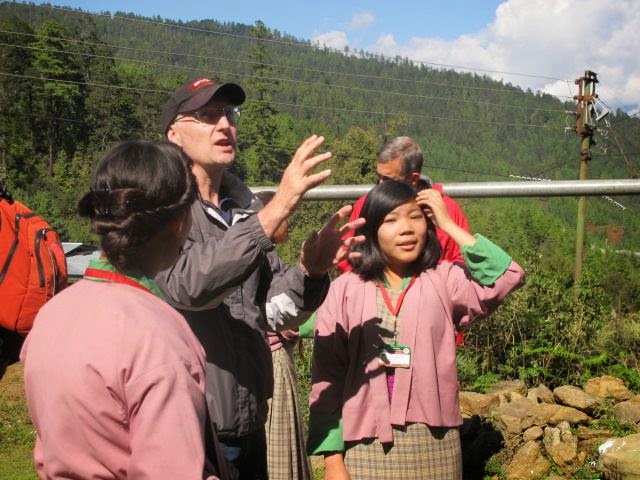 The program also grew out of our observations that many of the students here in Chamgang often have extremely poor spoken English skills compared to their reading and writing skills, a consequence of lack of real-life opportunities for practice and the fact that many of their ‘English-medium’ classes are often translated into Dzongkha. 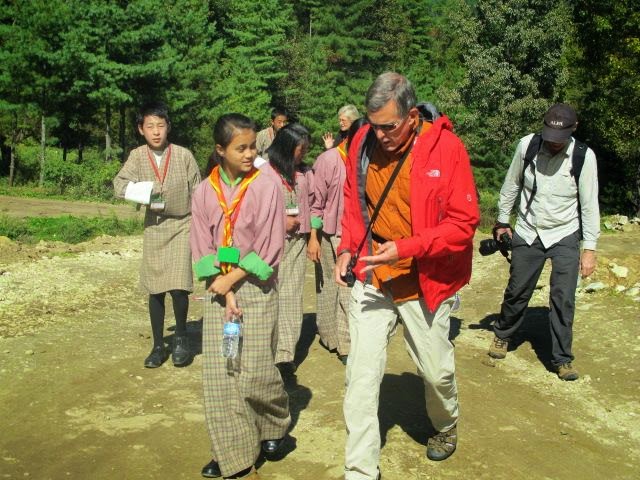 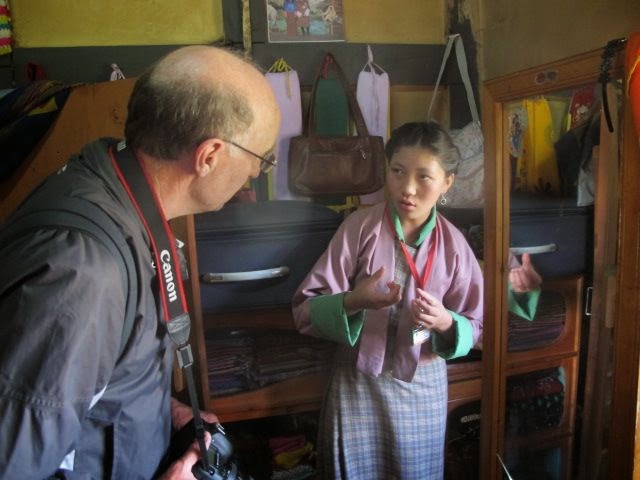 As part of the program I wanted to give students the opportunity to develop the content knowledge, language skills and conversation skills necessary to conduct such a program. So alongside our regular program of reading short stories, exploring essay writing, improving our reading comprehension and tackling grammar, spelling and vocab, we also began conducting a talk-rich ‘guiding program’ to equip the students with the skills necessary to guide their guests on a half day visit around Chamgang.

First of all we brainstormed and discussed what kinds of activities we could offer to our guests as part of a visit, then settled on three of the most interesting and achievable: a visit to a traditional rammed-mud house, a visit to the local goempa and a guided walk in the forest. Next, students engaged in a range of language and talk rich activities designed to equip them with the verbal skills and content knowledge necessary to guide guests during these three activities.

These activities included using flow charts to complete information sheets about Chamgang’ trees and houses, cloze activities to improve reading skills and content knowledge, essay reading, summarizing and note-taking to improve content knowledge and organisational skills, the learning of necessary vocabulary words, spelling practice and of course lots of role plays in which students either played the role of the guide or the guest. 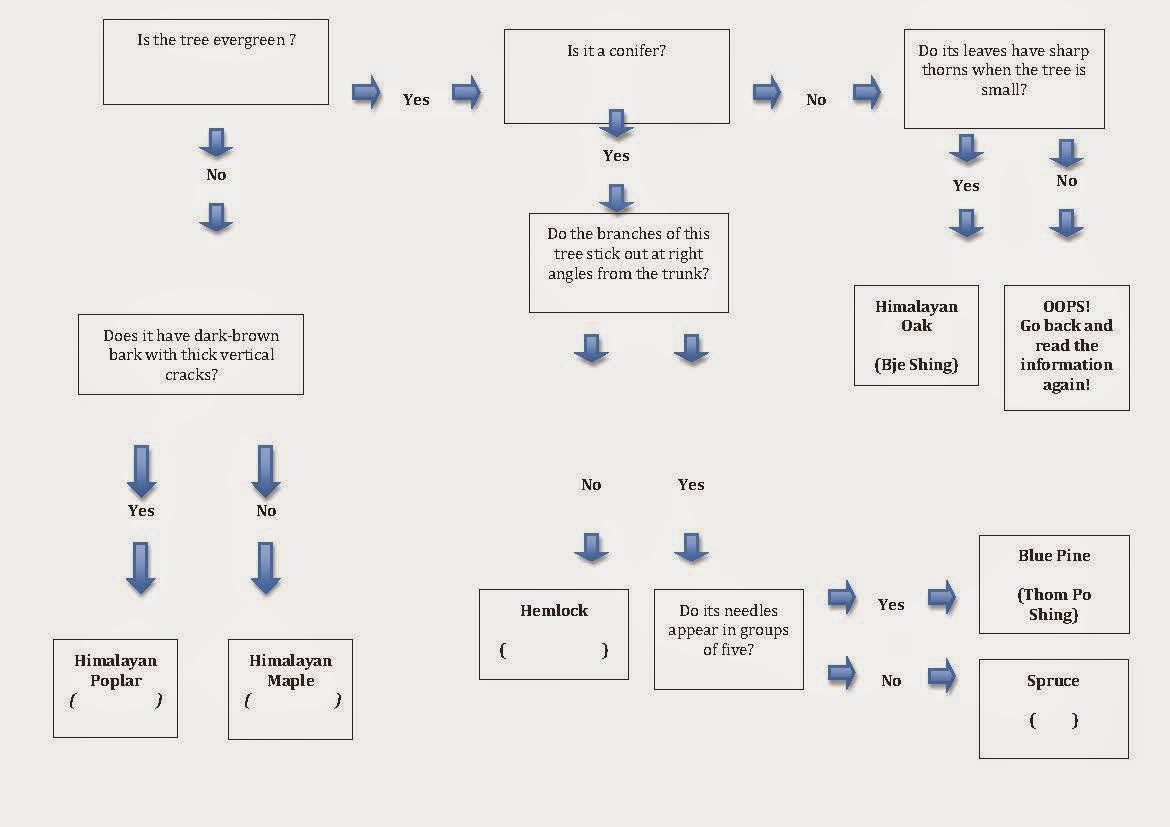 I was tempted to add urgency and extra relevance to these activities by telling the students that guests would indeed be coming soon to the school and that the students needed to make sure their skills and knowledge were top-notch. But I held off on doing this, knowing that if I wasn’t able to organise the guests, the students would be deeply disappointed and I would lose all my credibility with them.

When some friends of ours – an Australian couple who first brought Lucy’s mother, Lekkie, to Bhutan in 2011 and who have been running very culturally sensitivity and authentic photography tours every year since, told us that they would be returning this year, I sent them an email inviting them to Chamgang for a half day tour of the village led by the students.

The details of the trip are best recounted in the words of this article from Kuensel, the national paper. 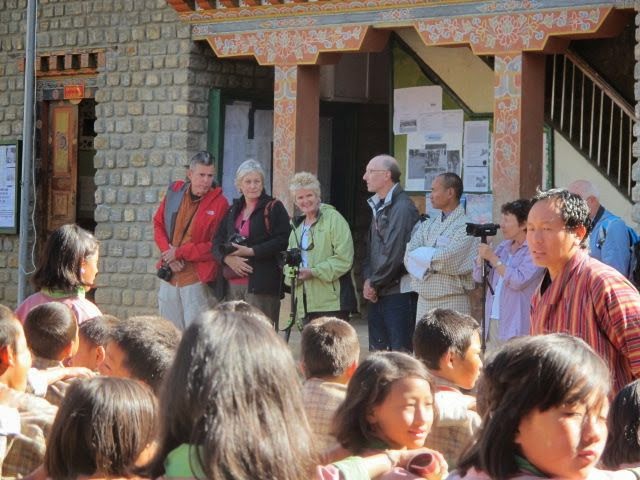 One unique program with twin objectives

Learning: Students and tourists interact during the tour program last Saturday
The Chamgang junior guide experiment has the added benefit of teaching English

Tourism: The chilly morning gave way to a bright sunny day.  Yangchen Gatshel LSS in Chamgang, Thimphu was swept clean and ready to receive their guests on October 25. Thirty-six class VII B students, who were to act as guides for the half-day program to tourists, waited in the assembly ground, some rehearsing their lines.

The tourists, including about a dozen Wheaton College students studying in Royal Thimphu College, three Australians, two from the Philippines, among others, arrived in time for the assembly. The assembly over, students were divided into groups with two foreigners each, and headed for a two-storey traditional house in front of the school gate. 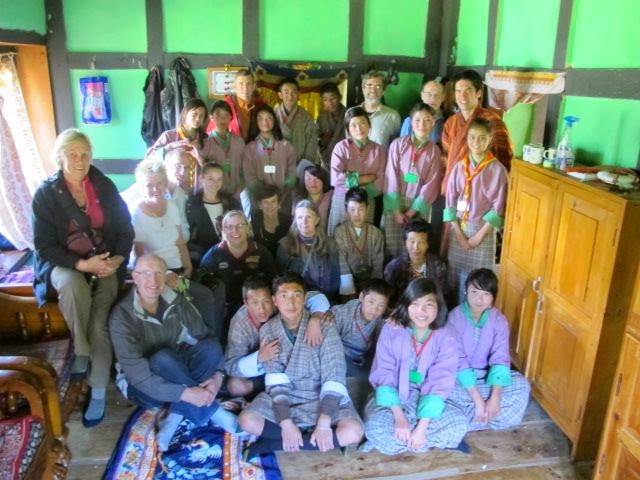 A big colourful phallus on the wall of the house was the first thing the guides-on-training introduced their tourists to.
“This is a sacred thing and symbolises Drukpa Kuenlay,” a student said, blushing as he spoke.
“Who’s Drukpa Kuenlay?” asked the tourist.
“He is a god,” came the swift reply.
“Women can become pregnant with his blessing,” the young boy continued, while his group mates stood giggling behind him. Other groups came and went through similar experiences. While the tourists looked serious and attentive, the guides speaking to a tourist for the first time acted nervous and shy.

The groups then drifted around the house, and the groups became louder and conversations shifted to other symbols painted on the house. From there, they walked to the local temple and were served tea in a traditional Bhutanese house.  The tour was wrapped up with a stroll through the forest to see water driven prayer wheels nearby. The guides, thereafter assumed control of the tour, giving mature and detailed explanations to any query.  The group members took turns to talk.  Other members supplementing occasionally. 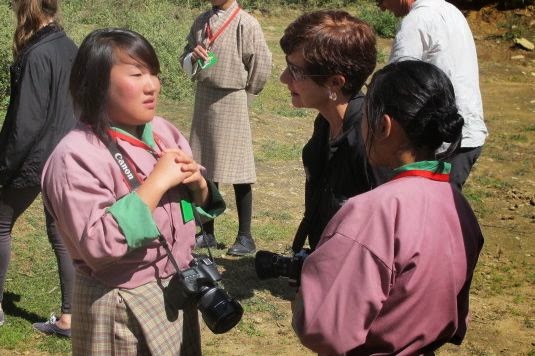 Their English teacher from Australia, Matt Stretton, who came up with the idea, kept an eye on the groups and stood ready to help. Matt said the idea for the program arose out of the many excellent experiences he and his wife Lucy had when visiting their students’ homes, or being guided by them through the local forests.

“Those from Dagala exhibited a strong passion for their local culture and environment, which really helps them overcome any misgivings they might have about not being able to adequately communicate in English,” he said. 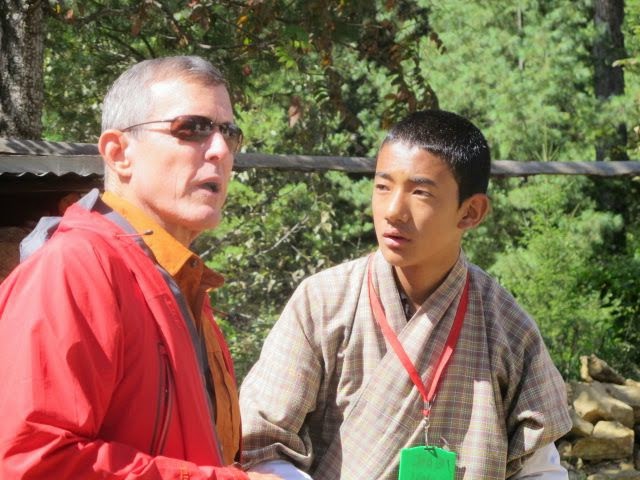 The program also grew out of their observations that many of the students in Chamgang often have poor spoken English skills, or are afraid to speak in English to a native speaker, a consequence of lack of real-life opportunities for practice.

“Once they speak with foreigners, and those foreigners understand their English well, it would give the students confidence, which would encourage them to keep speaking,” he said.

The students performed well.  Their research and practice for days had paid off.
“Some of us were reading our essays from morning and getting ready for the tour,” 15-year old Suk Bahadur from Dagana said. A native of Chamgang, Chimi Wangmo and her friends had anticipated the visit and learnt their terms well.  The vocal girl even convinced her mother to serve tea to the whole group of more than 50 people. Tourists, fully convinced and impressed, spent a long time after the tour shaking hands and bidding farewell. 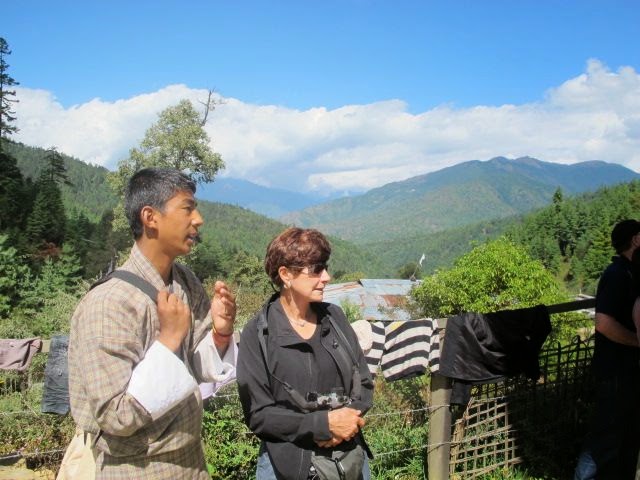 Josh and Noah Sutton, tourists from Australia, who arrived just three days ago, said it was a good way to start exploring the country. “The students were very confident and knew a lot about their community. They’re polite and jovial, so we enjoyed the tour around the community,” Josh Sutton said. Among the tourists was the executive director of the Bhutan Canadian Foundation, Nancy Strickland, who suggested the students write down their experiences and also about the community.
“The program is a win-win situation, as the students improve their spoken English and the tourists get to learn about the community first hand,” she said. 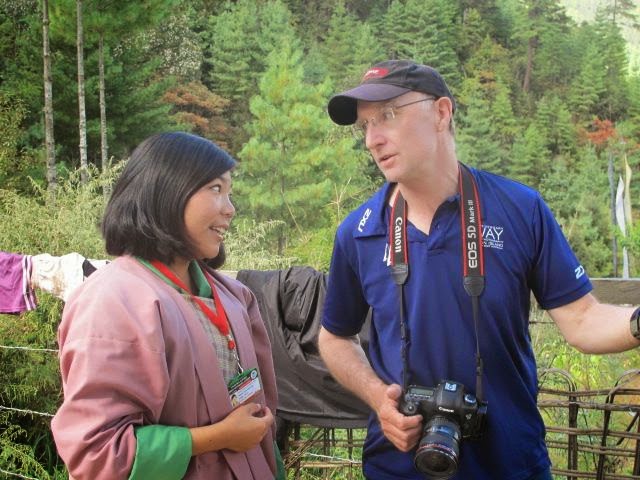 Matt conducted the same program with a group of 20 tourists from Australia a week ago with class VII A students. “It was a success,” Matt said. For those not familiar with Bhutan or Chamgang, it is a unique opportunity to see a slice of life that they wouldn’t otherwise get to see and a good chance to contribute to the education of the students here, he said. Among the students, Matt said, there is also a strong representation of first generation yak-herder students from Dagala and Lingzhi so such tours could be an interesting insight into a very unique way of life. 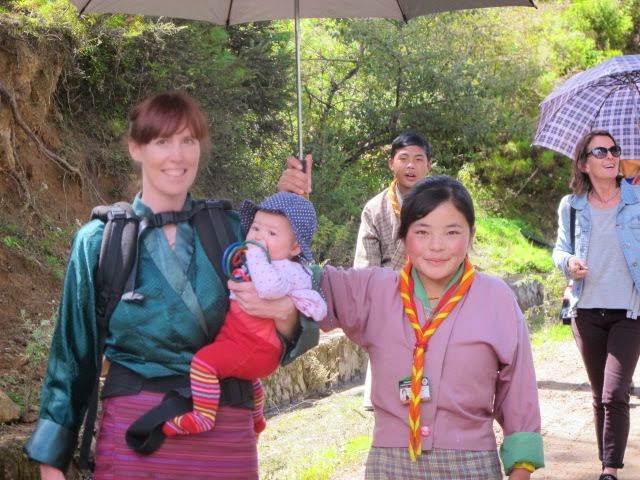 Matt is a volunteer teacher who came through the Bhutan-Canadian Foundation on a two-year contract. “I’ve already talked to an Australian tour operator who has agreed to bring tourists to this community, so the school could continue with the program even after I’m gone,” he said. Chimi’s mother Tandin Bidha said that she was happy the students got to learn in a different way.
“Despite being on the trekking route to Dagala from Thimphu, we don’t see a lot of tourist visiting our village,” she said. 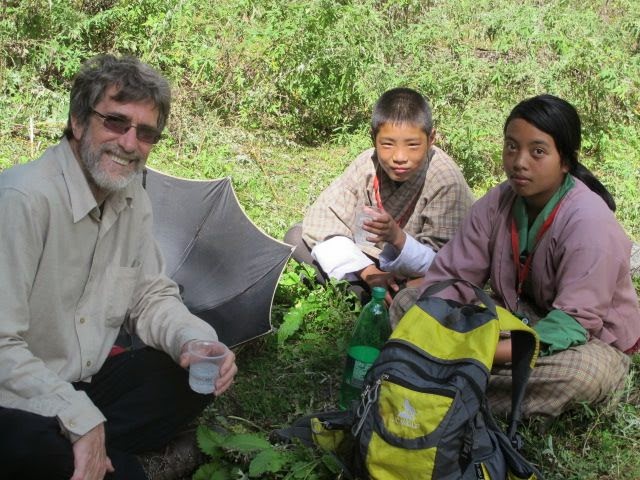 As for the students, they wished the program was longer and more frequent.
“Talking in English with a foreigner is not a difficult task, besides I’ve learnt a lot about our culture,” Nima Buthri, a girl from Lingzhi, said.
“I don’t want to be a guide in future, but my English speaking improved a lot because of this programme,” another student said. 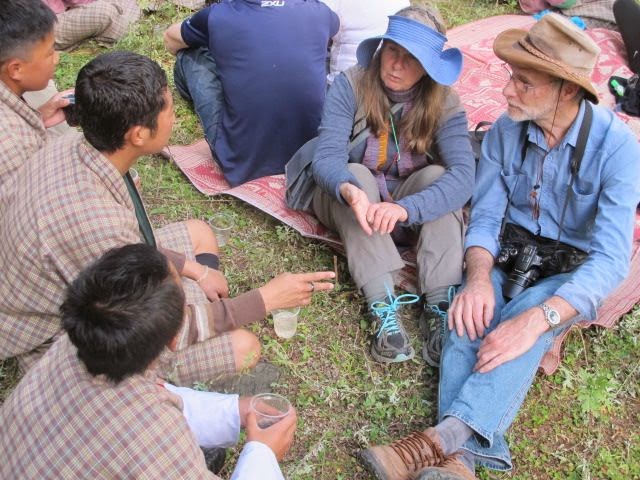 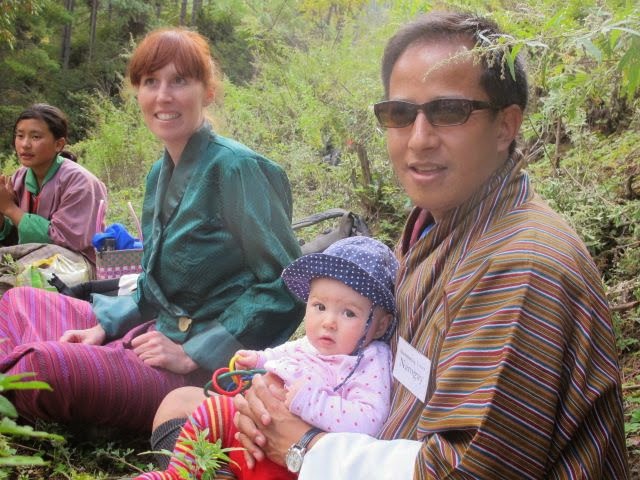 Lastly, a letter written to all of our guests by Suman one of the Class VII students after the program had ended.

Some other great Bhutan blogs